The Dunwoody North Subdivision was developed in 1963 / 1964 by Tom Cousins -- an area still considered "far out" to most of Atlanta's residents at that time. However, Mr. Cousins' first venture in residential development proved to be a huge success. The first homes were built on North Peachtree, East Kings Point Circle, Kingsfield Ct, Brookhurst, Huntington Circle, and Vintage Lane. At the initial development stage, East Kings Point Circle and Brookhurst ended at their intersection, and the southern segment of Huntington Circle extended to Stonington Road, which ended at that point. Original home owners (Davis, Ruffin, Griffith, Coley, Dimling, Curran, Welton, and Dierks to name a few) may still live in Dunwoody North, a tribute to the wonderful neighborhood we all share.

In 1964 shopping, restaurants and entertainment were not plentiful, or easily accessible, like Perimeter Mall is now. Chamblee Plaza was the only place to shop, and Sandy Springs and Brookhaven had the nearest restaurants. 1-285 only went from Roswell Road to Chamblee-Tucker, and Stonington Road had not been extended to Tilly Mill! 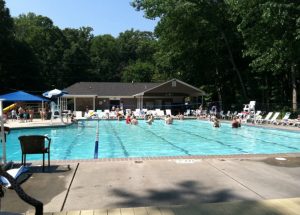 The story goes that Barbara Keel, a real estate agent and resident, was taking some paperwork to DeKalb County Courthouse to be filed for the club facility, The clerk asked her for the name of this new club facility, and being familiar with the Piedmont Driving Club and the prestige associated therewith, Ms. Keel gave the name Dunwoody North Driving Club. The name has remained and the club is still known as the "Driving Club."

The note for the original club facility was paid off in the mid-80's and membership to the Driving Club opened up to the adjacent subdivisions. This came at a time when members were aging and their children were leaving home and not using the pool facilities. The Club lost members and struggled to maintain itself. Then membership was opened up to anyone who wanted to join, providing they were sponsored by a member in good standing. In 1990, a new clubhouse, designed by our neighbor, Steve Lyman, was added to the Driving Club to attract more members and make the Club membership more attractive to residents who wanted more than just swimming and tennis. 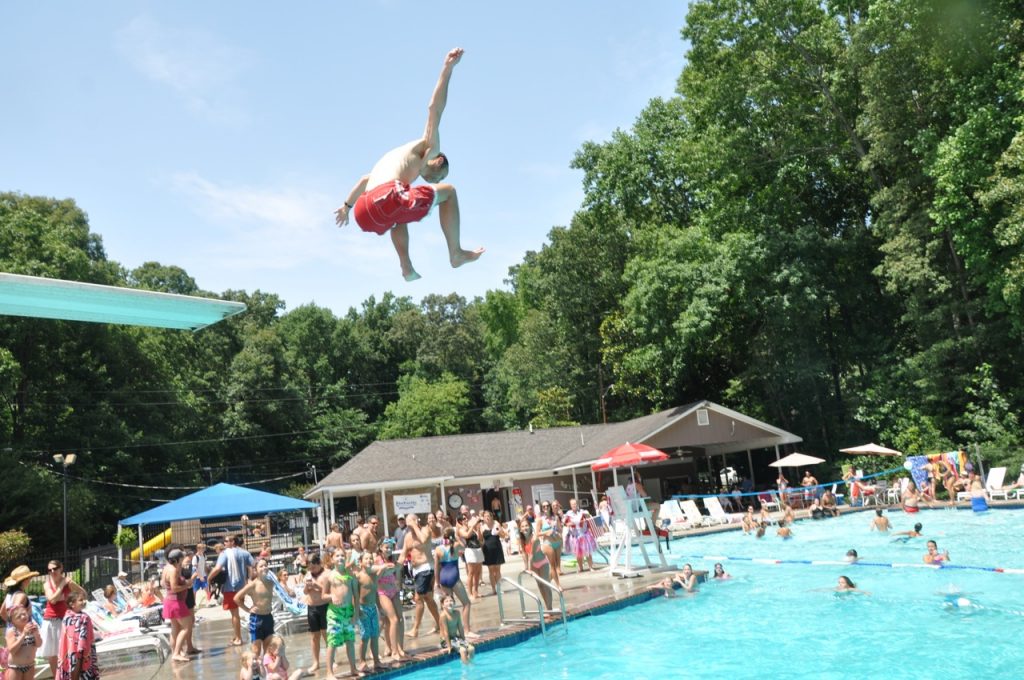 The original residents worked harder than we can imagine to develop this area into the beautiful neighborhood we now take for granted. It took a lot of foresight, determination, and pure physical labor to get things going. For instance, the pool and driveway area at the club were located in a ravine. Arrangements were made with DOT for the dirt being removed from the Chamblee-Tucker/1-85 interchange to be brought in to fill the area. Well, guess who had to get it smoothed out and packed down!

The first pool was treated with chemicals in buckets. It wasn't until the early 70's that a chlorine system was installed and enough money was available to upgrade the bath house facility. Around 1970 the first two tennis courts were built, with lights added later. Peachtree High School was completed in 1969, two years ahead of schedule, due to the diligent work of neighborhood parents who completed a survey of the area showing the number and ages of every child in the area. They took this information to the County proving enough enrollment potential for the school to be completed. Before Peachtree High opened, students attended Sequoia in Chamblee and elementary children went to Hightower on Tilly Mill. Chesnut Elementary was opened in the early 70's. 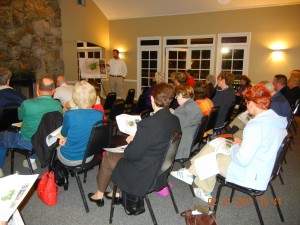 County presentation at a DNCA meeting

Over the years Dunwoody North had an active Civic Association overseeing area development and keeping a watchful eye on zoning to maintain the residential character of our community. Everything was quiet and under control in the late 1980's when the Civic Association went dormant for about five years. In 1993 nude clubs, traffic, and air plane noise were the dominant topics that brought the Civic Association to life again. One of the first items on the agenda was to add the adjacent subdivisions of Dunwoody Trails, Laurelwood Farms, Andover Estates, Briars North and Brafferton to the Dunwoody North Community.

Today our neighborhood is thriving, real estate prices are maintaining because of our "close in" yet wooded location and young families are revitalizing both the neighborhoods and the area schools. The Dunwoody North Driving Club has just completed a major overhaul by resurfacing the pool and many local streets are being renewed by the city.

What once started out as a "far out" suburb has now become the premier location in all of Atlanta to live. We have easy access to transportation, shopping and dining, yet are just minutes from the high tech commercial and medical districts of the Atlanta metro area. We have mature tree lined streets with good schools, low crime, well built housing and nearby recreational facilities. Dunwoody North has it all going for it, and the Civic Association is working hard to make sure that it doesn’t change.

Note: Information for this article was provided by Frank Welton, one of the Founding Residents and his information was originally published in a 1994 Civic Association article.

For more history, you might check out the Dunwoody Preservation Trust.